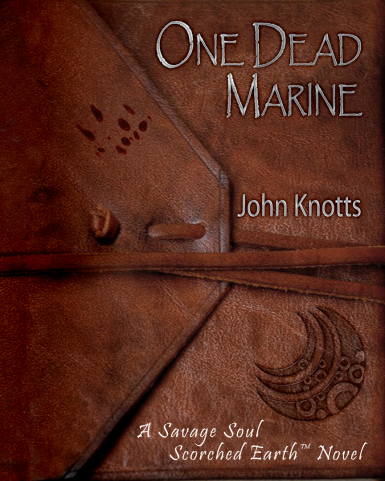 Enter the world of The Savage Soul™ and Scorched Earth™ — the advanced society of the twenty-first century that died a painful death — and the killer’s name was Yellow Mike.

Join Anthony Moon, a Native American U.S. Marine, who finds himself in an unfathomable apocalyptic world of 150-year old technology, magic-wielding demons, flesh-eating zombies, and monsters of every imagination.  Journey with him in this first volume of many where Lance Corporal Moon learns to survive–barely–in a fanatical environment built out of the madness of a twisted drug and an ensuing great disaster.

Moon guides you through his journeys and experiences as you follow along in his own personal journal of the life of a Marine on the Scorched Earth™.

Connect with him now in his story — One Dead Marine.

"The title One Dead Marine is deceptive! The book isn't your traditional cut-and-dry military tale. It is a sci-fi story in which the fantastic and the terrible become the everyday routine of life. There are moments in the book where the author touches on ideas that are bigger and I hope that those ideas will be explored in subsequent books. The preface is elegantly written and it along with the prologue provides the foundation for the story. As I have often been accused (and rightly so) of giving away the plots of movies and books I have tried my best not to do so in this review. I am intrigued by where future books will take the main character, Anthony Moon, and look forward to future installments. The book is 113 pages (not including preface and prologue) and was a quick and easy weekend read."

"The author's creativity and fresh perspective in this post-apocalyptic drama kept me turning the pages. Interesting imagery and settings paint a vivid picture of a world in chaos... I am curious to see what will come next!"

"Spoiler alert! Corporal Moon is not dead. At least, not yet! This is a fun, quick read. Action. Adventure. Demons. Zombies. Yeah, it’s all in there. Ends in a cliffhanger that makes you look forward to the next installment."

To schedule an appointment or find out more about the services we offer:

Get Social with Us!